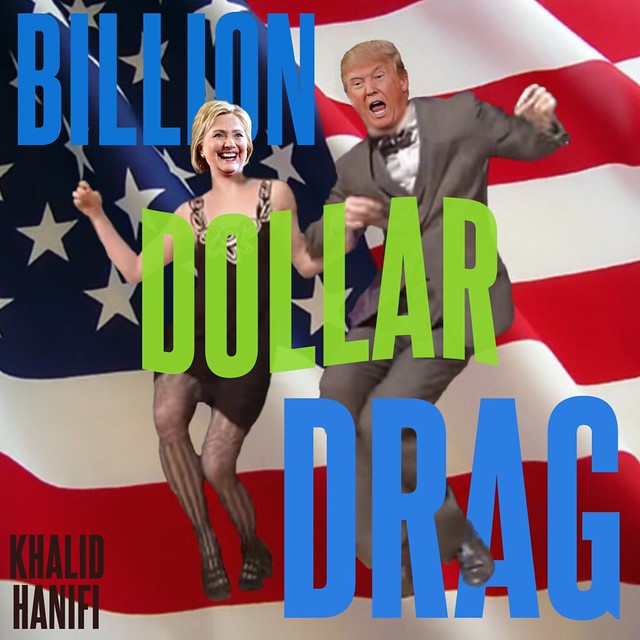 Ah, the United States of America, land of plenty, where one can choose amongst a cornucopia of options to satisfy all nuances of desire and have those choices delivered to one’s doorstep. When it comes to electing our next president, however, we (with precious few exceptions over the years) choose from two options only. Do you prefer Good or Evil, Red or Blue, Donkey or Elephant? Don’t even think of asking for Chartreuse or a Horse, or – horrors – of thinking that there might be good and evil in all of us. What we have are two and two only – Two!, who have been anointed by virtue of having been shaped by the lapping, sculpting fires of the American electoral process.

This season, both of the mandatory Two have baggage fit to burst and dozens of tired skeletons peeking from their respective closets, apprehensively wondering whether they will be fully reanimated in this, the peak of our electoral cycle. The Republican candidate, Hillary Clinton, and the National Enigma candidate, Donald Trump, also both share that necessary attribute of the power hungry – the ability to say anything at all (fiction, truth and all points in between) in their quest for the most powerful seat on earth, the Throne of POTUS.

One thing of which we can be reasonably certain, regardless of which of the Two ascends the Throne, is that our beloved war machine will trundle, myopically and belligerently, forward.  Though much is made in these passionate times of partisan intransigence, when it comes to that perpetual motion war juggernaut, in constant bloom with jobs (translation: dollars!!!!!), there is nothing but bipartisan harmony, or rather, as Gore Vidal used to say, “one party with two right wings.”

Yes, with patriotic pride, nay, fervor! – let’s revisit the birth of the National Security State and merely some of the imperial highlights of POTUS administrations past, be they branded Democrat, Republican or National Enigmatic:

Harry S. Truman (D):  The implementation of National Security Council Report 68 in April 1950 is ground zero for the permanent militarization of the US economy.  Boys, we’ve figured out how to make the economy roar…let the Cold War begin!  That the Soviet Union is a flimsy reed to spar against in this “war,” economically devastated, and 20 million people shy, from its efforts as our ally in the Good War, is a matter of little consequence.  Arthur Vandenberg (R-MI), in support of the outlook articulated in NSC 68 tells HSD he’ll need to “scare the hell out of the American people,” and so he does.  Better dead than RED!  The Korean War (first in the Cold War (™) series of conflicts) begins two months later.

Dwight David Eisenhower (R):  Korea grinds down, military “advisors” are committed to Vietnam.  Coups are orchestrated by CIA in Iran and Guatemala; the democratically elected leaders of both countries had proven to not be malleable enough to US interests and thus are placed in the RED bucket.  DDE is kind enough to let us know upon his descension from the Throne of POTUS that perhaps this “military-industrial complex” is not all it’s cracked up to be.

John Fitzgerald Kennedy (D):  Picking up the baton from DDE, JFK escalates in Vietnam.  Impolitely, Castro and his Cuban revolution refuse to be assassinated.  Class is “in” at the School of the Americas.

Lyndon Baines Johnson (D):  Aware early in his tenure that Vietnam is “unwinnable,” (though certainly Vietnam is a win-win for RMK-BRJ, Monsanto, and Boeing), nonetheless, LBJ escalates further and “stays the course,” but then decides not to seek a second term, which is, of course, also unwinnable.

Richard Milhouse Nixon (R): RMN gives us Henry Kissinger, the imperial dunce that keeps on giving. Vietnam bleeds into Laos and Cambodia.  Millions perish, tens of thousands of whom are American.  In another hemisphere, outraged by the impetuousness of Chilean self-government, RMN shrieks “make the economy scream;” HK along with fellow war criminal Pinochet oblige and then some, treating Chile to the original 9/11.

Gerald Rudolph Ford (R): GRF doesn’t have much time to get ‘er done, but memorably – via HK – gives green light to Indonesia’s Suharto to put down the East Timorese, with the assurance of full US support, both immoral and materiel.

James Earl Carter (D):  Graduates from the School of the Americas continue to excel in their post-graduate work.  JEC also gives us the Carter Doctrine, which plops a huge imperial foot smack dab into the depths of the Persian Gulf.  JEC’s National Security Advisor, Zbigniew Brzezinski, and his lovable pals in and around “Team B” (Dick Cheney, Donald Rumsfeld, Paul Wolfowitz, et. al.) fashion a strategy for baiting the Soviet Union into Afghanistan, midwifing militant Islam into existence in the process – first iteration, the “Mujahideen.”  You know what?  It worked!!

Ronald Wilson Reagan (R):  American glory is restored post-Vietnam, as 135 square mile island Grenada is bravely spanked. Blessing the Mujahideen as “freedom fighters,” RWR also spots sinister RED plots south of the border and fixes to cut them off at the pass, bankrolling any force that commits to placing US interests before their own – John Wayne had nothing on RWR.   School of the Americas grads continue to shine!

George Herbert Walker Bush (R):  A thousand points of light turn out to be thousands of bombs at night when GHWB unleashes the war machine on unwitting, unsuspecting Panama and then on previously obedient stooge Saddam Hussein’s Iraq – the first made for TV military action that incorporates all of the lessons learned from the “failure” of Vietnam.  Uncooperatively, the Soviet Union disappears.  Another Force of Evil must be discovered quickly!

William Jefferson Clinton (D): GHWB’s Operation Desert Storm is extended by WJC via intermittent bombing and sanctions throughout the 1990s, leading to the deaths of 500,000 Iraqi children.  Clinton’s ambassador to the UN, Madeleine Albright (advisor to one of the Two in 2016, guess which one!) finds this to be a price worth paying. Honorable mention: lonely, lone superpower rebrands its efforts as “humanitarian” in the Bosnian War.

George Walker Bush (R):  GWOT?!  We have found a new Force of Evil!  Maybe we’ll call it “radical” or “militant” Islam.  Welcome back, Dick, Don, Paul – the whole gang!  With as little thought as possible after 9/11, the bombing of Afghanistan commences – war machine fully, fully functional, sir!  Then, Iraq, having been softened up for an entire decade since GWB’s pop had drawn his line in the sand…  Did you say soft?  Let the bombs rain down!!

Barack Hussein Obama (D): Inheriting GWB’s wars, Nobel Prize (™) winner BHO finds a way to draw down the ostensible size of US involvement in those conflicts (even magnanimously withdrawing from Iraq for a couple of years), but somehow – magically! –  US military action expands, now in 135 countries!, including, of course, those old chestnuts, Afghanistan and Iraq. BHO also finds a way to make this all fun – Terror Tuesday meetings at the White House where he gets to personally pick the next unlucky souls to be extrajudicially assassinated – by remote control, no less!

Which of the Two will be the next to wield the Sword of POTUS?

Hillary Rodham Clinton has the support of prominent neo-conservatives and various other historically Republican figures, not to mention some quantity of the 50 former GOP national security officials that will not be supporting her opponent. In sum, HRC will be more bellicose than BHO, if not GWB; per economist Jeffrey Sachs, she is in fact the standard bearer of the war machine.

Donald John Trump, on the other hand, increasingly looks like someone who has applied for a job without reading the job description. The absurdities of the DJT campaign reveal themselves to us on a daily basis and are wonderfully entertaining (as his TV ratings attest), yet there appear to be few positions that he is actually qualified for, other than Orange Lout.  If you imagine, however, that a DJT administration would be less warlike than the above, think again.

That the identity of the next person to wield the Sword of POTUS will be of little consequence to the prospects of our sanctified “defense” industry (Lockheed Martin, Northrop Grumman, Boeing, et al) is as close to a certainty as there is in this tremulously uncertain world.